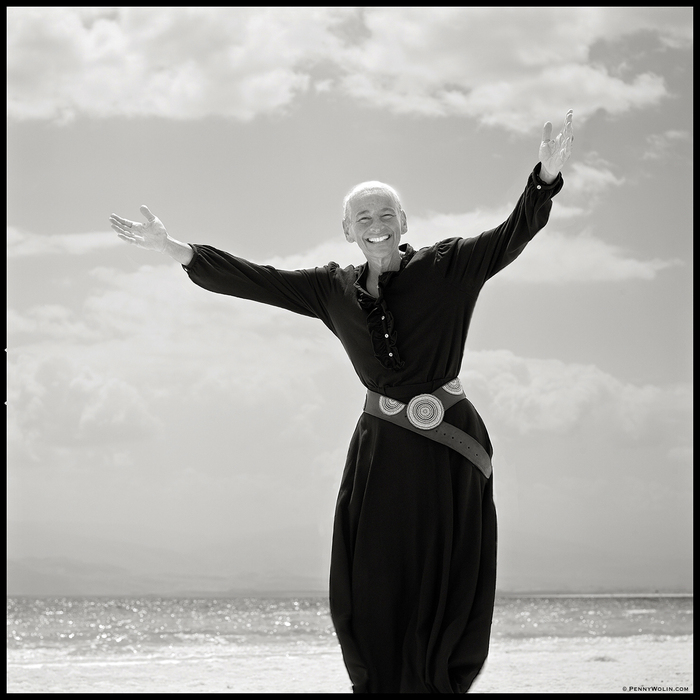 Penny Diane Wolin’s first professional photography assignment was in her viewfinder at age 16, covering the world’s largest rodeo, Cheyenne Frontier Days. She then moved to Los Angeles where she trained at Art Center College of Design, UCLA Department of Anthropology and the American Film Institute. She is the recipient of grants from the NEA and NEH, and has created wry and insightful documentary and editorial portraits for numerous national magazines, including LIFE, Vanity Fair and Playboy; corporations such as Peter Michael Winery, Charles Schultz Museum and Wolfgang Puck Food Company; and private commissions, including the Brant Foundation and Peter B. Lewis.

Parallel to her education and commercial experience, Wolin has used a camera and tape recorder to document varying cultures in the United States. Guest Register, an early and formative body of work consisting of 32 photographs with excerpted interviews documents the residents of each room in the St. Francis Hotel in Hollywood, California. Whether the resident of each room was there for a night or a decade, they reflect the human condition; our strengths and weaknesses of the human personality. The exhibition of this work was reviewed by the Los Angeles Times as, “A poignant yet devastating documentation of the residents of the St. Francis Hotel on Hollywood Boulevard. Combining image and text, Wolin’s examination of life’s lost souls and anonymous citizens who are just passing through manage to be both emotionally distanced without being condescending.” — Colin Gardner.

Her project, Jackalopes, Cowboys and Coalmines details the changing culture of the cowboy in the midst of a full-scale energy development boom. This work is held in the permanent collection of the Smithsonian Museum of American History and continues to stand as a relevant view of the inexorable destabilizing nature of what we call progress.

The Jews of Wyoming: Fringe of the Diaspora, has exhibited solo at the Smithsonian Museum of American History and the National Museum of Jewish History. Faced with a world who seemed to disbelieve that Jews migrated to rural areas, of the West, Wolin set out to discover the culture of a 140 year Jewish presence in the Cowboy State. The book of the same title is published by Crazy Woman Creek Press (©2000.) This work was hailed by Library Journal as “A unique and important contribution to our understanding of Jewish life in the United States.”

In 2016, Crazy Woman Creek Press, with partial funding from a Kickstarter campaign, published Wolin’s multi-generational documentary, Descendants of Light: American Photographers of Jewish Ancestry. Over an eight-year period, Wolin relentlessly photographed and interviewed 70 American Jewish photographers, with an eye toward understanding their ancestral history and how that did or did not effect their artistic motivations to use photography. Through her collaboration with these artists, they discuss and discover issues of Jewish survival, ancestral memory, mysticism and magic, as well as the meaning of observance in any form. The book garnered a coveted Kirkus Starred Review, as they described the work as, “… large, beautifully reproduced photographs. A rich, well-documented collection for students of photography and Jewish culture.”

When not drawn to the peripatetic life, Penny resides on a small farm in Northern California, alongside mighty oaks, giant redwoods, a flock of chickens, a not-very-feral cat and a loyal and witty standard poodle named Gotham.